Just over a year ago, a joint research study by a coalition of teams from four universities in Canada, Italy and the UK revealed the first observational and cosmological scale evidence to support the premise of our Universe being a cosmic hologram. 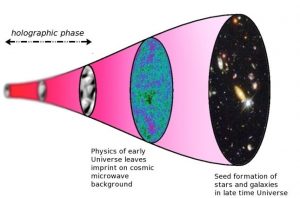 They did so by analysing irregularities in an energetic relic of the early Universe known as the cosmic microwave background (CMB) whose radiation was emitted around 380,000 years after our Universe came into being.

Publishing their findings in the prestigious journal Physical Review Letters1 they were able to show significant evidence to support the view of our Universe being innately informed and holographically manifested. In their view as substantiated as the traditional hypothesis of cosmic inflation for the basis for these irregularities.

The idea of a holographic Universe which was first proposed in the 1990s, posits that all the information that makes up our apparently 3D spatial reality is encoded on its 2D boundary with the information pixelated at the so-called Planck scale.

Professor Kostas Skenderis a Professor of Mathematical Sciences at the University of Southampton in the UK and one of the lead researchers of the study, commented: “Holography is a huge leap forward in the way we think about the structure and creation of the universe. Einstein’s theory of general relativity explains almost everything large scale in the universe very well, but starts to unravel when examining its origins and mechanisms at quantum level. Scientists have been working for decades to combine Einstein’s theory of gravity and quantum theory. Some believe the concept of a holographic universe has the potential to reconcile the two. I hope our research takes us another step towards this.”

A further paper in Physics Review Letters around the same time, by lead researcher Johannes Handsteiner of the Institute for Quantum Optics and Quantum Information in Vienna2 and his colleagues, used light from distant astronomical sources and entangled with laboratory photons to experimentally show the reality of nonlocal connectivity of our Universe to a distance of at least 600 light years and thus supporting the view that our Universe is fundamentally inter-connected.

Coming around the same time as the publication of my book The Cosmic Hologram: In-formation at the Center of Creation3, these discoveries back up the numerous evidence across many fields and all scales of existence of our Universe existing and evolving as a unified entity; innately informed and holographically manifested. And such realisation does indeed, as Professor Skenderis hopes, point to how, for the first time, quantum and relativity theories can be reconciled by considering energy-matter and space-time as complementary expressions of information.

Even more importantly, the increasingly compelling evidence is revealing that reality is informationally based, that mind and matter are essentially unified and that consciousness isn’t something we have, but fundamentally what we and the whole world are.

This site uses Akismet to reduce spam. Learn how your comment data is processed.